The picturesque village of Haría is known as the ‘Valley of the thousand palms’ and lies in a verdant, beautiful area in the northern tip of Lanzarote, full of palm trees.

Surrounded by a medley of green fields and colourful wildflower meadows, this tranquil and unspoilt village stands in surprising contrast to many other parts of the island. Its narrow streets and alleys are lined with traditional houses and dotted with the bright colours of bougainvilleas and geraniums.

There is also an attractive town square, the shady Plaza León y Castillo, bordered by restored historic houses and even more palm trees. At one end you will find the Nuestra Señora de la Encarnación parish church that houses a small sacred art museum.

The idyllic atmosphere of Haría has attracted many artists who have settled here and can be seen working away in a variety of craft shops and galleries. It was not surprising that César Manrique chose to retire here as well, where he was also buried following his death in 1992.

While in Haría maybe you would like to follow a winding road around the Risco de Famara up to a mountain pass to reach the Mirador de Haria, a high viewpoint just 3 miles (5 kilometres) south of Haria. From this mirador you will enjoy spectacular views over the village, the high cliffs of the north-western coast, the Peñas del Chache which at 2,200 ft (670 metres) tall is the highest mountain on the island and the villages of Tabayesco and Arrieta in the east. 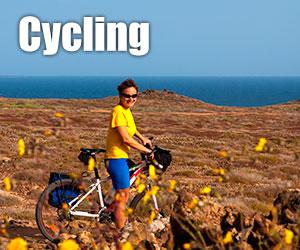